I was asked to shoot for Happiful magazine who were doing a feature on the Amy Winehouse foundation. I was asked to take a couple of portraits of two girls who were staying there and one councillor. The foundation itself opens its doors to a select number of women each year to give free accommodation for two years, counselling and help getting them back on their feet after suffering abuse in one form or another, be that alcohol, drug or domestic violence. I wanted to keep the portraits quite natural in terms of lighting and the subjects strong yet relaxed in pose. very minimal work done in post, just some levels and some saturation changes. enjoy.

I have a long running project about craft food/drinks producers that i am working on constantly and after having shot various drinks makers (vodka distillers in Brooklyn, NYC and a champagne makers in Hampshire) i wanted to shoot a brewery and Bath has a fantastic one called The Electric Bear, which has one countless awards already for its ale. I love backlighting subjects anyway so this gave me a chance to do just that. I knew there would be lots of steam/smoke from the various tanks so backlighting it would add more drama. I wanted to capture the whole process from initial brewing to distribution. A lot of the shots were shot wide open to add more flare with a fair bit being retouched to remove branding and lighting stands! I had the luxury of attaching lights to an overhead mezzanine to increase the general light levels and override any tungsten that was floating around, this made my job a lot easier and was almost like shooting in daylight apart from working with my main key light which was the backlight.It was a good chance to try out my new canon 5DSr in a testing environment, lots of steam and heat basically. It worked and performed really well and the quality of the final images were amazing. I have included a few images here and more can be seen through my agency (image source). If you have any questions then feel free to ask . 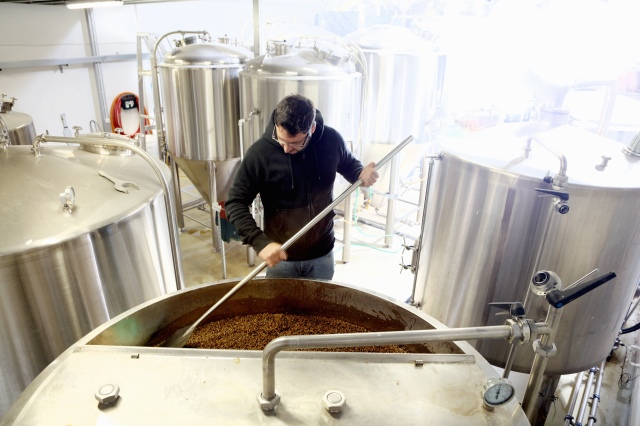 I was commissioned to shoot Liz Hoggard who is a journalist. It was to coincide with a feature she was writing on relationships (specifically the one between her partner chris and her friends and Liz). The article was to illustrate the differences between her and her partner and the fact that being a journalist involves being on your phone and attending parties quite a lot, as opposed to her partner chris who doesn’t drink and prefers an early night. I interpreted this visually with the use of props (cocktails on one side, green tea on the other etc…)

I wanted to create as much drama in the lighting as possible yet still give it a clean feel. I used a gridded softbox at the front and positioned it above camera. As there was quite a bit of depth to the image I needed o throw some lighting into the background. I used a head with a orange gel for the background shot (to give a bit of warmth to the bar behind). But the real tweaks came in post. I underexposed the image itself to make sure there was detail across the full range then upped the contrast quite considerable and desaturated the shot. I think it worked really well and gave a depth and texture to the image

Portrait of Liz and Chris Hoggard